Unfortunately, my croton did not survive. I couldn’t rid it of the spider mites and eventually (after a number of tries) we had to move it to the conservatory for fear that there’d be spider mites wandering around my kitchen. From there, it was even more neglected. It lost all its leaves and gave up.

I didn’t even want to recycle the soil, so I had to put it in the bin. I’m not quite sure where spider mites live, but if it’s within the soil I don’t want to put that in my recycling bin nor my garden compost.

I have a small shrub in my office whose flowers had begun to wilt faster than I expected. I used the “Picture This” app to see if it could tell me if I’d over or underwatered it. Turns out, it was dying because of the small, white bugs which had made its home on the leaves. (I was quite impressed that the application spotted this, as I didn’t with my own eyes.)

I Google around for how these bugs managed to get into my house and office. Both parasites seem to come from the same place: they probably came from the shop with them already. Eggs, babies, or just well hidden and in small number. It’s not likely that a pregnant spider mite found my kitchen and the single plant that they’re interested in in there.

This has sort of put me off growing potted plants. However, croton seeds are purchased by the 100g increment an cost £15 for them. I just want one seed… 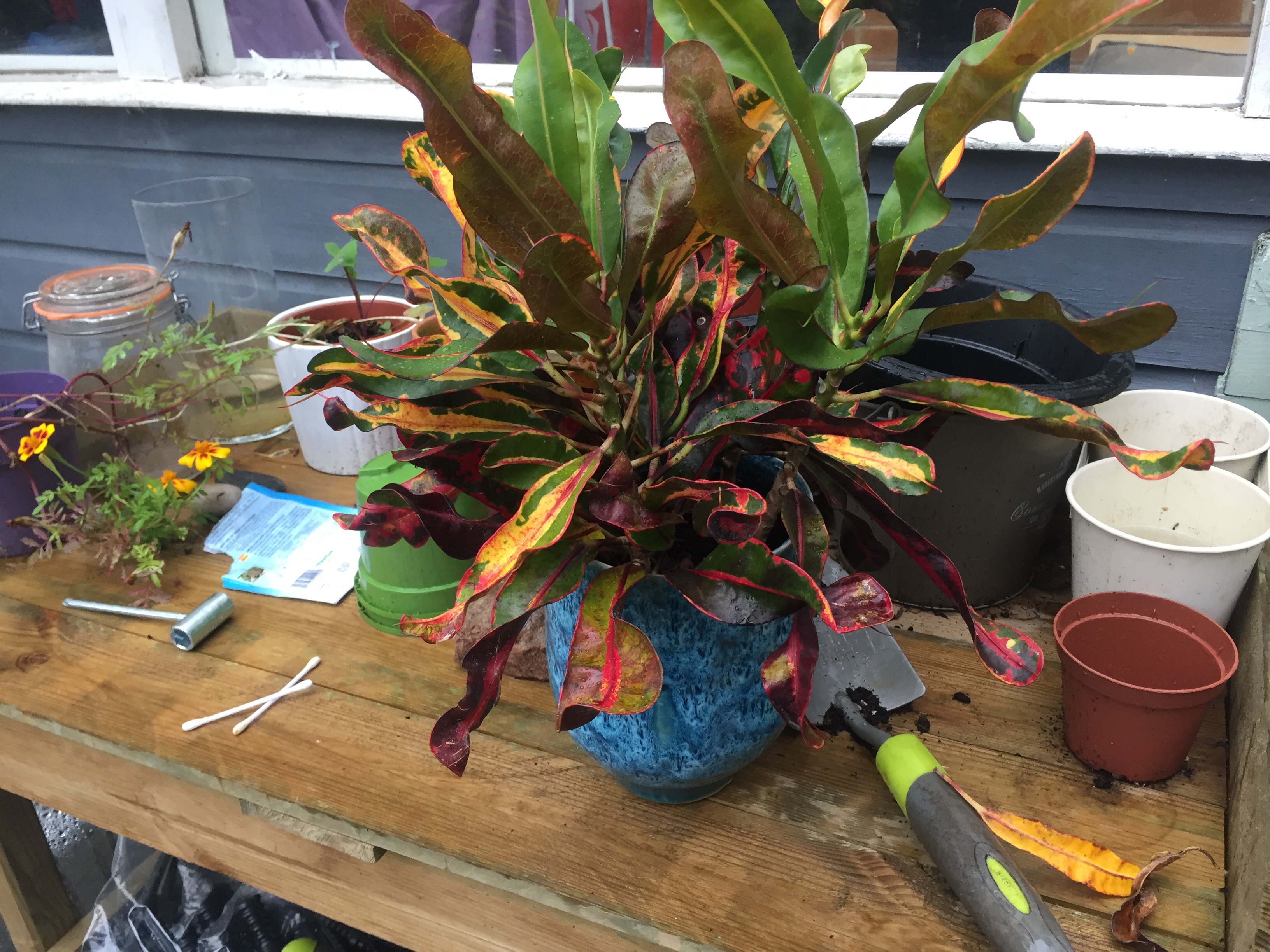 We woke up this morning to find this guy covered in dozens of the tiniest spiders didn’t seen. A spider mum must have had her eggs in here.

I’ve spent some time this afternoon cleaning it out with a couple cotton buds. In the rain, no less.

I know everyone was eagerly awaiting the update to what the mysterious plant was that I was curious about previously.

Armed with this information, I’ve moved the plant to the window sill which gets light all day. I’ve also started only watering it when the top soil is dry, and then watering it thouroughly (allowing the excess water to drain, not sit).

I’ll also have to look into buying a spray water dispenser, as it apparently likes humidity. Maybe being sprayed with water will trick it into thinking it’s humid.

A quick trip into a garden centre “just to look around” meant us leaving with quite a lot of things. One of the things was this plant.

Unfortunately, we’ve no idea what it is. I’ve been watering it when it looks dry – but that might be too much or not enough.

It was skinny and curly like this when we bought it, so I’m assuming this is how it’s supposed to be. It’s such an impressive plant – not quite like anything I’ve seen before.

It seems to have lost its label along the way back home.

If anyone knows, it’d be great to be able to look it up!